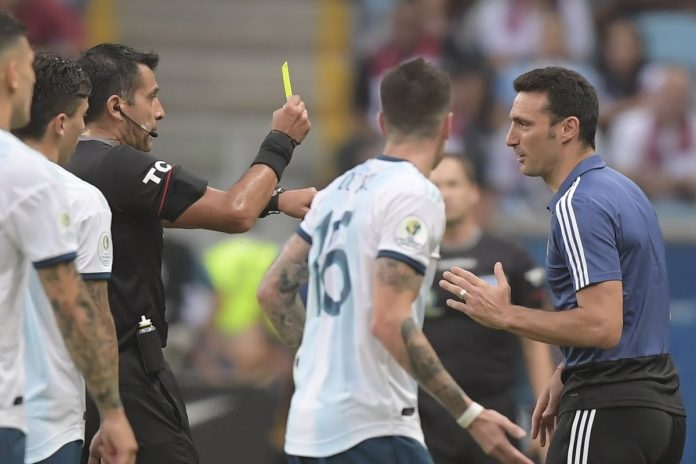 Argentina coach Lionel SCALONI hit out at the referee while also speaking about his team.

It was a heartbreaking loss for Argentina but coach Lionel SCALONI is taking nothing away from his team and did not hold back regarding the referee. Speaking to the media after the match, here’s what he had to say:

“I didn’t like the referee. He was not up to the level for a match of this caliber. The small plays (calls) always went the other way. The linesmen and the fourth official kept telling TAGLIAFICO that he was  already cautioned. He had to stop playing and if something were to happen, a decision would have been made.”

Lionel SCALONI thinks the second goal should have been called off:

“It was a play where we had a player (Sergio AGUERO) on the ground, he felt a hit and FOYTH stopped. It’s why I went crazy. The second goal should have been called off.”

SCALONI also spoke about the team:

“If it was based on merit, Argentina would have gone through to the final. It was the best match we played in terms of the level of the opponent, because we created a lot and we suffered very little. Brazil is in the final, they did their thing but in terms of play, Argentina deserve to play the final and we are talking about something else. Sergio’s (AGUERO) chance which hit the crossbar and didn’t go in, Leo’s (MESSI) post… Luck was not on our side. I believe we were superior.

“No doubt, today, this group showed that they feel the shirt. I think we left an image for the future of the Argentina national team and it’s a good road to continue. To play on that pitch, in those conditions, against a superior opponent… It means nothing because we’re not playing the final but if we take into consideration what we did today, everything that will come will be positive.”