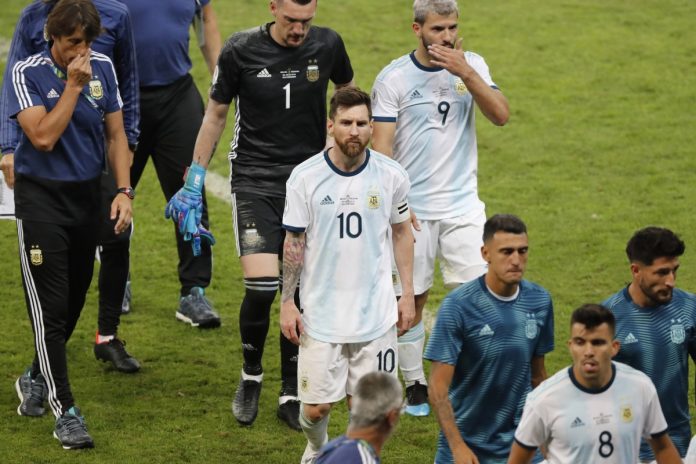 Argentina played their best match at the Copa America but lost 2-0 to hosts Brazil.

It was a heartbreaking match for Argentina. After Brazil had scored in the first half following some great play by Dani ALVES, Argentina picked up the pace and started playing considerably better. Despite Brazil pressuring a lot and seeing much of the ball, Lionel MESSI slowly started creeping into the match and taking over. Lionel SCALONI’s team had one chance in the first half, a Lionel MESSI free kick which found the head of Sergio AGUERO but his effort hit the crossbar.

The referee was strict, whistling at every opportunity and more often than not, in favor of the Brazilians.

By the start of the second half, Argentina started gaining momentum and chances. After a nice sequence of play, Lionel MESSI hit the post. SCALONI’s team kept growing in confidence but were also exposed in the back. Next game the second goal but not without controversy.

A lovely play involving Lionel MESSI, Sergio AGUERO and Lautaro MARTINEZ saw AGUERO run inside the penalty area but get tripped up by Dani Alves. Juan FOYTH was convinced there was a penalty and appeared to stop playing. However, the referee didn’t whistle, didn’t go to VAR and Brazil would go on to score through a counter attack.

Another penalty or at the very least a VAR shout was denied for Argentina. A corner kick was sent into the area and Nicolas OTAMENDI was clearly elbowed in the throat. The play continued and was eventually stopped. Replays showed that OTAMENDI was indeed elbowed but no VAR on the play.

There is still the third place match which takes place on Saturday against the loser of Chile and Peru.

Clear pen against Aguero not given before Brazil scored its second goal. Argentina got absolutely robbed. pic.twitter.com/GeVuPvX0Fx

Second clear pen, this time against Otamendi. CONMEBOL has rigged this Copa America for Brazil. A total football travesty. pic.twitter.com/9dHS7AmwG6