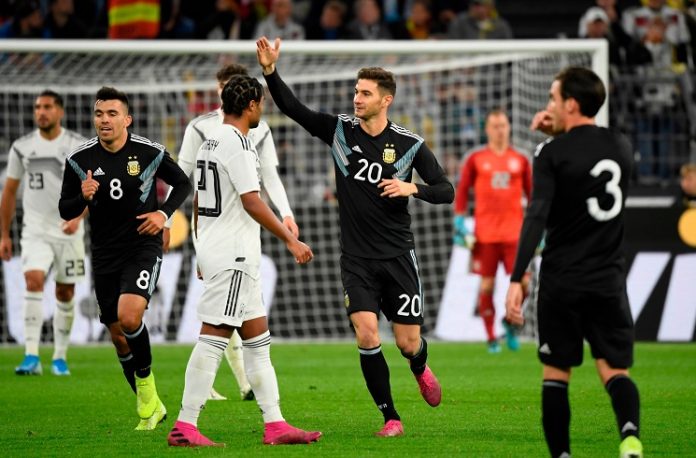 Argentina came back from behind to draw 2-2 against Germany with Lucas Alario and Lucas Ocampos scoring the goals.

Defensive mistakes cost Argentina two goals in the first half. Both center back defenders, Marcos Rojo and Nicolas Otamendi went for the same ball but it was Germany’s Serge Gnabry who got to the ball and score the first goal of the match.

Poor marking lead to the second goal as a ball played into the penalty area rolled to Kai Havertz who converted from close range.

There were two changes made at half time as Lucas Ocampos came on for Angel Correa and Marcos Acuna in for Marcos Rojo. A third one would follow as Lucas Alario would be substituted in for Paulo Dybala.

Agustin Marchesin would make a big save in the second half to keep the German’s at bay.

Marcos Acuna would send a lovely ball in to Lucas Alario and the Argentina would score to cut the lead in half.

Lucas Ocampos would make it 2-2 after Lucas Alario dribbled in between the German back line and Ocampos would score the last goal.