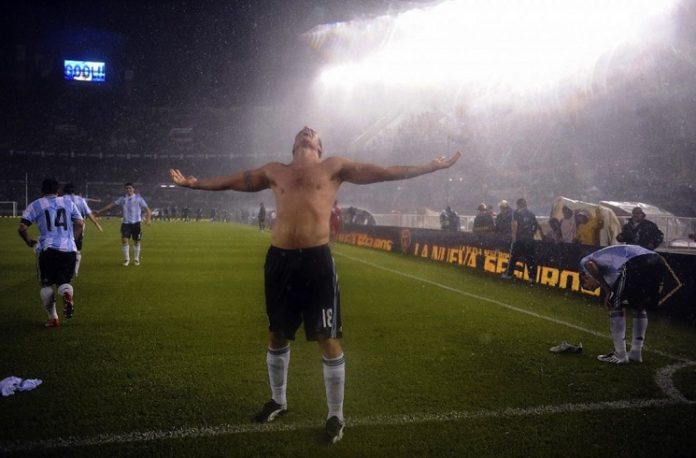 On this day in 2009, Martin Palermo scored a memorable goal to save Argentina in a 2-1 win vs. Peru.

October 10, 2009 was the date. It was the goal which saved Argentina’s entire 2010 FIFA World Cup qualifiers. It was Martin Palermo scoring in a typhoon with Diego Maradona doing a belly slide as the entire stadium erupted.

Argentina had two matches remaining to qualify for the World Cup. The first at home against Peru and the second away to Uruguay. Everyone expected Argentina to defeat Peru but not in the way they got the win.

Pablo Aimar was back in the Argentina team after being away for over 2 years and it was the Argentina debut of Gonzalo Higuain. Here was the team Diego Maradona put out:

While the two time world champions controlled much of the first half, they went into half time without a goal. Martin Palermo was substituted in for Enzo Perez at half time.

Shortly after the break, Diego Maradona’s team would get the goal. It was the returning Pablo Aimar with a lovely pass to Gonzalo Higuain who would score his first Argentina goal. Martin Demichelis was brought in for Gonzalo Higuain as his job was done for the day.

Federico Insua would replace Pablo Aimar for the final substitution.

With the rain blocking any visibility and with Argentina losing control of the game, Peru would equalize in the 90th minute and Argentina’s World Cup chances were in serious danger.

That was until Martin Palermo would score another legendary career goal. Argentina were awarded a corner kick and it was taken by Federico Insua. The ball wasn’t fully cleared and landed on Angel Di Maria’s foot. He would cross it in and it land to Federico Insua. He would take a shot which would be blocked by a Peruvian player and land in front of Marin Palermo.

What came next was a fairy tale ending. Palermo’s first touch would send the ball into the net with the crowd celebrating and the players running around the pitch. He saved his team from one of the biggest humiliations which could ever happen. He scored a goal which ensured that Argentina were still in the running to qualify for the 2010 World Cup.