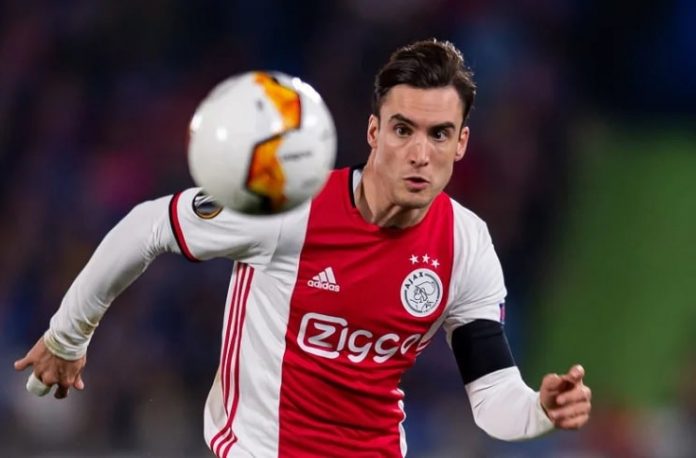 Nicolas Tagliafico gave an interview where he spoke about the Argentina national team, Lionel Messi, his time with Ajax, retirement and wanting to become a coach.

“Lionel Messi, him, more than anyone, gets angry when we lose. But he’s more aware now that he has to enjoy the Argentina national team. We don’t know until when he will play but he won’t have too many Copa’s left with the Argentina national team. He’s in a place where he wants to enjoy everything, the training sessions, the matches. He is the leader and the protector of the team.

“I’ve been able to enjoy the Argentina national team. With Ajax, I had the chance to play against big and difficult opponents like Real Madrid and I enjoyed it. At times, with the national team it’s not easy because you’re thinking more about the result than the how. But if we have an idea and we are convinced, obviously it’s possible. Results rule but the way to start winning is to do what you feel.

“It’s not easy to get results right away because it takes time but there is an improvement. I see a strong team, a united team and a competitive team. That is very important. It’s a shame that we don’t have the World Cup qualifiers or the Copa America. We have players of high quality to be able to play any way. After that, we have to figure out the best way to be a competitive team and to be very strong.

“We have to find a very strong structure. Not only for Leo (Messi) but also for the future, for what’s coming. It’s good that a solid base is forming and we can’t undo that. If we could help Leo and he could help us, things will be much better. We have to create a structure and from there, we can start to grow.”

He also spoke about his move to Ajax and his retirement:

“Coming to Ajax made me grow as a player. Not only as a professional but also in the way I see football, tactically and technically. One has to prepare to play in a team with such a defined identity. Because if you don’t, you don’t play. The main difference is the idea of the game. Here, almost every team tries to play with the ball on the ground. In Argentina, you see something different lately. A football that is more physical, of trying to go for the second ball. Also, aggressively speaking, it’s different. Here, the football is more peaceful, it’s calmer. In Argentina, a team that is more intense with a lot more pressure is difficult to play with. Not here, they let you play more.

“I’ll be 28 in August. It would be a beautiful moment to make a jump in Europe. This could become a short term goal. And long term wise, I’d want to stay in this continent until I retire. After that, I’ll see if I go back to Argentina or not. For now, there’s still a lot of time left. There are more defeats than victories. Last year, I felt very comfortable. I felt like we would go to every pitch and win, win, win, win. It got to the point of saying “this is a dream. I can’t be living this.” Now, I’m back to reality and I realized that it’s normal to lose.

The 27 year old spoke about wanting to become a coach:

“I spoke to Menotti’s son who has a coaching school and I signed up to find out if the courses could be done from afar. I want to have it all completed by the time I retire. When I retire, I want to be a coach. I like the tactical aspect of it, team management. I feel like I could be important in helping put something together. Today, I’m at Ajax with a very clear identity and way of playing. I try to always add things and I know that you can always keep growing and learning.”