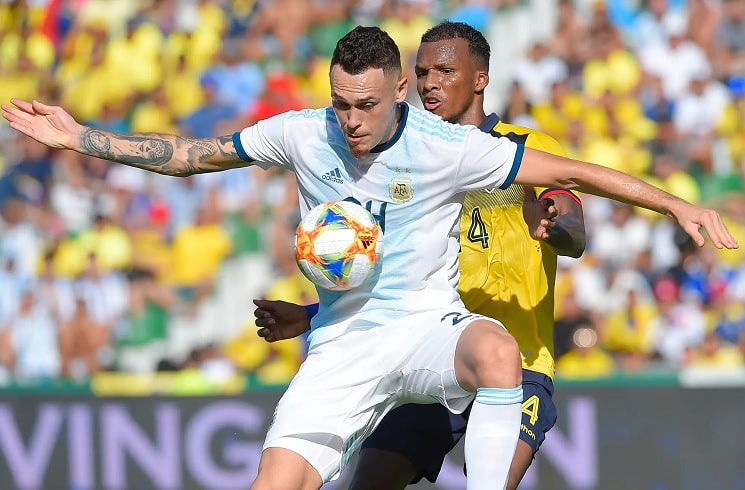 Lucas Ocampos of Sevilla spoke about playing alongside Lionel Messi, the Argentina national team and more.

Ocampos has been part of the Argentina national team since the end of last year. Taking part in the last few matches, he has made the most of it. Speaking in an interview with Planeta (FM 94.7), the Sevilla man spoke about how he has enjoyed playing with Lionel Messi, how the Argentina captain surprised him and more. Here’s what he had to say:

“We had already played before, Sevilla vs. Barcelona. I was just in line and he told me: “Hi Lucas, how are you?” We spoke a little. I have a very good relationship with Ever Banega and he is his friend.

“After that, before the match vs. Germany he told me “Do it, this is your chance”. He spoke to me a bit. If someone doesn’t know him, you don’t know how he is, if he will talk to you… He surprised me when we were with the Argentina team. He’s just another one of the guys.”

About if it’s difficult being his team mate on the pitch:

“I understand the one’s who said that. It’s true. He is always one step ahead. But it’s not that it’s complicated to play with him. It’s complicated for you to try to do the things that he wants. For me, it came out really well because my play is more vertical, to go to the empty spaces.

“In the games we played, all the runs I made, he saw. He puts the ball between the full back and the center back. I enjoyed it a lot. Playing with players who have that vision of play, you enjoy it.”

About Argentina coach Lionel Scaloni giving him a chance to play with the Argentina national team:

“One always dreams about it, it’s what you always look for, to prepare for it. When I was there before the start of the match against Brazil, I looked at myself… Where I Was. I was nervous for the moment, anxious, emotional. Things that go through your mind.

“The games against Germany and Brazil, they were the matches that I enjoyed the most in my career.

“I’m anxious about playing in the World Cup qualifiers and wearing the Argentina national team shirt but/ I know the time will come.”