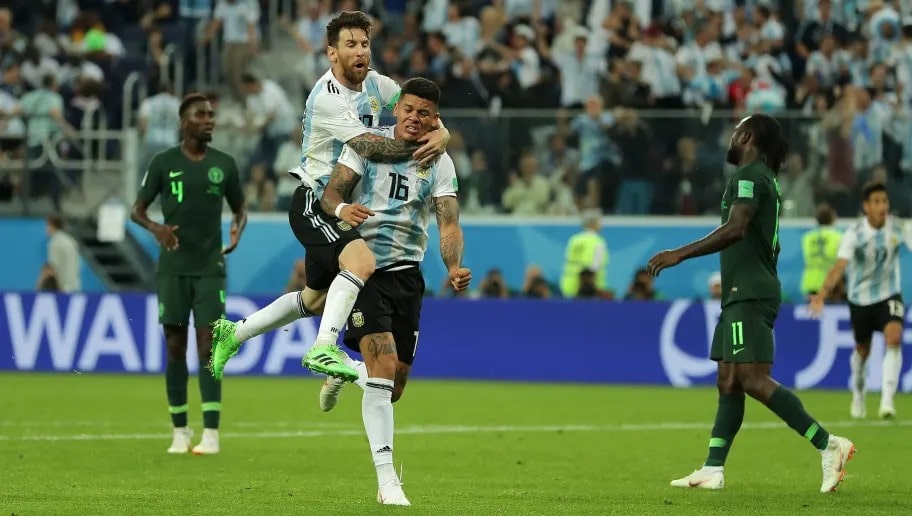 Marcos Rojo was a hero at the 2018 World Cup for Argentina as he scored the goal which secured qualification to the Round of 16 and he spoke about it all.

From the goal vs. Nigeria, to the relationship with Jorge Sampaoli and his off the pitch friendship with Lionel Messi, Rojo spoke about it all. Speaking in an interview with TyC Sports, here’s what he had to say regarding the match against Nigeria:

“The first half we played incredible. But when they drew level with us, we fell apart. We didn’t have a plan. We just tried to score a goal before the end of the match. And it was luck… Imagine that I almost caused a penalty. They put in a cross, it was going for the number 9, I tried to close it down, it rebounded, went passed and it hit me on the hand…

“At times, the hero could have been the villain of the match. The goal was incredible. The next day, I couldn’t even talk. If you see the play, you’d say “What is Rojo doing there?” We went for a back line of 3, Gaby Mercado sends in the cross and I got to it on the other side. They put me in that place to score the goal.”

Rojo also spoke about the relationship with Jorge Sampaoli during that World Cup:

“From the start, things didn’t work out. After that, there were a lot of changes against Croatia. Me, Di Maria and Biglia were out. When you play your hand like that, it’s messed up. If it doesn’t work out, you lose the credibility of the squad. I felt that Jorge had lost a bit of it and didn’t know how to continue. It showed. The player perceives it.”

Regarding a talk the team had with Sampaoli:

“That was the talk. To tell him that we weren’t understanding him, that he was lost, that we saw the relationship with Beccacece wasn’t the best and that it had influenced the group a lot. After the match against Croatia, we all watched Iceland and Nigeria and thank God we were left with one more chance.

“At that time, the idea was to talk, to understand that we were in a difficult spot and that if we didn’t do it together, we weren’t going to move forward. He could make the decisions that he thinks are good but the correct one was this: That the greats show their face. More than just Pavon who played well when he did, Meza too…

“It’s not easy to play a World Cup and even less so one like this. If you don’t win, you go home with a knife in you that you could never take out. This wasn’t the time to gamble or try something strange. He accepted it in the best way, he knew we were right. If not, today, we wouldn’t be talking about how we made it to the next round.”

About his goal and iconic photo with Lionel Messi on his back:

“When my grandkids talk about Messi, I’ll be able to say “look at this picture I have: The grandfather carrying him, ha! That moment (his goal vs. Nigeria) was incredible. It was the goal I screamed the most in my life.

“Putting aside how great he is, we have a good relationship off the pitch. We lived beautiful moments.”