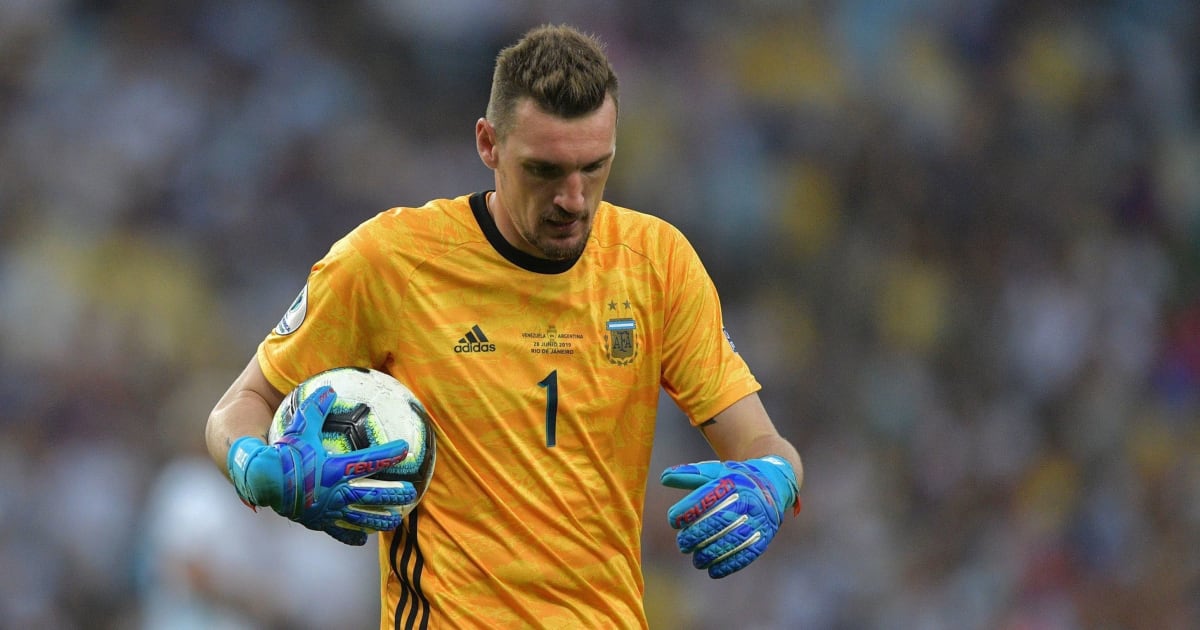 Argentina national team coach Lionel Scaloni has a good problem on his hands, one which is his goalkeeping situation.

For nearly a decade, six Argentine coaches relied on the services of Sergio Romero as their goalkeeper. He was the undisputed number one, despite not playing much with his club. But when he would put his the Argentine shirt, at least as of 2014, Romero was among the best in the world in his position.

However, that certainty lead to an uncertainty once Romero stopped being selected for his country. No bigger example would be than that of the 2018 World Cup when he was dropped from the team and it was Willy Caballero who was his replacement. The only problem with that was Caballero’s time had come four years too late. He didn’t have the best of performances and was ultimately dropped for current number 1 Franco Armani who has yet to put a foot wrong in the last few matches.

But if Armani hasn’t made an error or allowed the opposition to score, why are many asking for him to be replaced? The emergence of Emiliano Martinez the last few months first at Arsenal and now at Aston Villa has caused a sudden uproar among many Argentine fans. They want the Aston Villa shot stopper to take over veteran goalkeeper Armani as Argentina’s starting goalkeeper.

But is it because of the league he plays in? The club he plays for? Is it his age? Armani has reached and won the pinnacle of South American football not once but twice and with two different teams when he lifted the Copa Libertadores with Nacional in 2016 and two years later with River Plate.

Franco Armani is 34 years of age, playing against the best strikers in South America. While some may for some reason call it a farmers league, let’s not forget that the likes of Lautaro Martinez, Neymar, Leandro Paredes, Nicolas Tagliafico, Gabriel Jesus and many other South American players played in those farmer leagues the past decade alone. Armani has already experienced a World Cup and a Copa America. He knows the pressures of big game tournaments and possibly the most important of all, he knows the pressure of World Cup qualifiers.

In contrast, Emiliano Martinez is 28 years old up and against the best strikers the Premier League has to offer. But would it and could it cause more harm than good if coach Scaloni were to select him ahead of Armani? Despite Armani being 34, he would be 36 when the 2022 World Cup rolls around. Just about the limit for a top class goalkeeper.

Lionel Scaloni has no time to experiment as there are no friendly matches set between now and the World Cup. All of South America are behind in World Cup qualifiers and the coaches don’t even have enough time with their players to train when there is a qualifier to play. It would be a dangerous game to play from Scaloni to bench Armani, despite not really putting a foot wrong.

It could also send out the wrong message for the team. And what if that gamble backfires? Should Scaloni bench Armani and play Martinez instead but the Aston Villa shot stopper doesn’t perform up to his great standards, could that not only demoralize the goalkeeper but also lower the team’s morale?

Of course the opposite could happen. Scaloni could start Martinez ahead of Armani and have the former Arsenal goalkeeper shine. But is the risk worth the reward?

Scaloni seems to have found a solid base for his team. Armani, Montiel, Otamendi, Taglifico, Paredes, de Paul, Messi and Lautaro Martinez all seem to be at the core of that base. Why rock the boat by removing a piece of that puzzle and replacing it with someone who has never held that position?

Would it not be more wise for Scaloni and his team to continue with Armani until a number of poor performances or an injury forces their hand to play Martinez? Could it be better to start with Martinez after the 2022 World Cup, despite him being 32 years old?

No one truly knows the answers to those questions. They would have to happen in order for anyone to find out. However, one would have to say that it doesn’t look likely that Emiliano will touch the goalkeeping position for Argentina anytime soon. Should Armani have to be replaced, Boca Juniors man Esteban Andrada is also there and performing at a very high level for his club. And he also has some experience with the Argentina national team.

The position is Armani’s to lose. He has played 14 times for Argentina with his debut coming in a baptism under fire situation at the 2018 World Cup when the team needed him to perform. Here are his matches:

He hasn’t put a foot wrong and cannot be blamed for any of Argentina’s defeats. Armani has seven wins, three draws and four defeats, letting in 17 goals in the process.

Those numbers may not be the best but when looking at them individually, they aren’t bad by any means. Five of those goals and one of those defeats came against Nigeria and World Cup winners France in his first two matches for Argentina. Removing those, he would have six wins, three draws and three defeats, allowing 12 goals in 12 matches.

The team has been in desperate need of some stability in many positions and the goalkeeping position is arguably the most important one for a squad. Scaloni seems to have found a solution and a fairly good one at that for his team. There’s no doubting Emiliano’s capabilities. He may or may not be a better goalkeeper than Armani. He may or may not face tougher opposition than Armani. But to suggest to drop Armani all together for no mistake made and to lose much stability in the team because there is a goalkeeper who is performing just as well or even slightly better than him has to be considered a bit foolish. Simply because there are no friendly matches to play Martinez.

It could also be seen as a lack of respect not only towards Armani who has held his own but also towards Esteban Andrada and maybe even Agustin Marchesin who have represented Argentina before and done a good job of it. Unless Armani performs poorly, the likes of Andrada, Martinez and Marchesin will have to wait to put on the Argentina shirt.