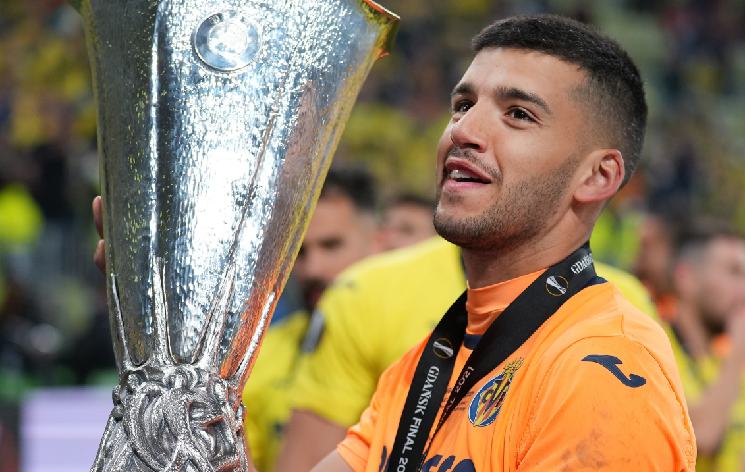 Geronimo Rulli has stated once more that he wants to be called-up to the Argentina national team while also giving his thoughts on Juan Foyth, Juan Roman Riquelme and winning the Europa League with Villarreal.

One of the, if not the hero of Villarreal’s Europa League final win vs. Manchester United, Rulli has his eyes set on the Argentina national team. He has represented Argentina before but he has never been a regular on the team. With the World Cup qualifiers and Copa America beginning next month, Argentina coach Lionel Scaloni has not selected the goalkeeper for the matches. Speaking in an interview with TyC Sports, Rulli had this to say”

“I always prioritized the national team. At other times in my career, it hurt me a lot not being there, it made me much worse. I understand that these are not just decisions that happen to me but for other people.

“Today I can say that I was the goalkeeper with the most unbeaten matches in the Europa League, I am a champion and I’ll stick to it. If that is not enough to get called-up… I don’t know what will be.

“The national team is always my objective but today I’m neither sad nor angry for not being there but I’m rather happy with my form.”

Regarding winning the Europa League with Villareal:

“The first trophy in the history of the club, a city with a population of 50,000. It was beautiful, a unique moment and I’m very happy for having been part of it. I’m still not aware of what I did, what we did. Not even in my wildest dreams would I have imagined this.”

He also spoke about the penalty shootout in the final:

“The only one who I didn’t see videos of was De Gea because he had never taken one. On top of that, I was angry when it was my turn to kick because I had gotten a touch on four of five of them before but was unable to save a single one of them.

“When I saved the penalty, that moment, I got on my knees and looked at the crowd and when I turned around, it was aa group of monkeys that came for me, it was incredible.”

“It’s a match that will never be forgotten here. Just like Riquelme’s penalty vs. Arsenal, now, there is the penalty that I saved the other day.

“Saying Riquelme here, in this city, they’re big words. He’s one of the biggest idols at the club. Every time you talk about Roman, it’s sacred words for them.”

“Maybe we aren’t aware of how good of a player he is because we see him very little. Because at Tottenham he didn’t have a lot of playing time or because with the national team he plays sporadically.

“But I see him in training every day, he’s an animal. He’s the player that has surprised me the most when I got here, the coach, the president and even my team mates. The truth is that Juancito won his place and the respect of everyone here.”