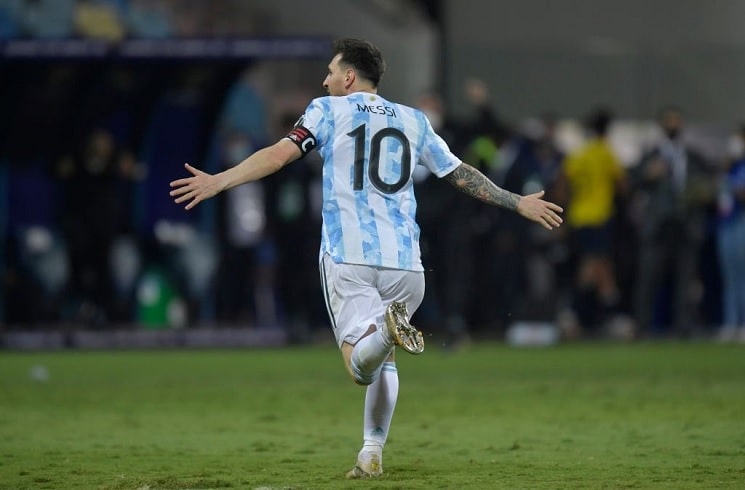 Lionel Messi, Lautaro Martinez and Rodrigo De Paul all scored for Argentina in their 3-0 win vs. Ecuador at the Copa America.

It was a match which saw Argentina have control of the ball and create many opportunities in the first half but only had one goal to show for it. Lautaro Martinez had the first real chance of the match as he was charging towards the penalty area, beat the goalkeeper but his effort was cleared off the line.

That’s not to say that Ecuador did not have chances. Two crosses inside the Argentina penalty area as they almsot scored but both efforts went just wide.

Rodrigo De Paul got the first goal of the match off a play started by Messi himself. Messi with a ball into Nicolas Gonzalez but he was taken out by the goalkeeper as the ball fell to Messi once more. While most expected him to shoot for goal, he would play a pass into Rodrigo De Paul and he would control the ball and place it in the corner of the net to give Argentina the 1-0 lead.

Nicolas Gonzalez had a chance to double the lead. A free kick for Argentina as Messi would cross it into the penalty area but Gonzalez would have his header saved by the goalkeeper and his effort off the rebound would be saved.

Argentina coach Lionel Scaloni would make several changes, one of which saw Guido Rodriguez and Angel Di Maria come in. Guido added some much needed stability for Argentina as Di Maria was a threat moving forward.

Angel Di Maria would pressure the Ecuadorian back line and win the ball back as he would pass it to Messi and Messi would play it to Lautaro Martinez who would place the ball into the top corner of the net to give Argentina the 2-0 lead.

De Paul would play a cross from deep which found Di Maria and he would get taken down on the edge of the penalty area. The referee would give a red card to the Ecuadorian player and it would be an Argentina free kick.

Messi would take it and score as he would aim towards the goalkeeper’s side and beat the goalkeeper for the third goal of the match. Lionel Messi leads the Copa America with four goals and four assists.