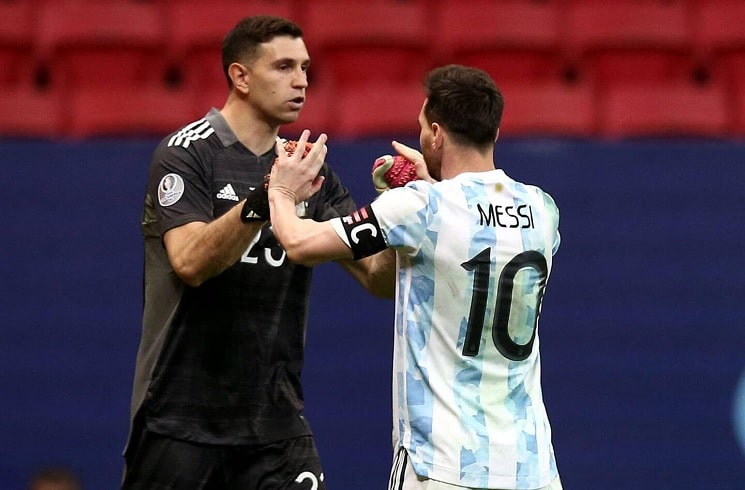 In a lengthy interview with Ole, Argentina Copa America winning goalkeeper Emiliano Martinez spoke about winning the Cup and having Lionel Messi as captain.

In this two part interview which will be translated here on Mundo Albiceleste, the undisputed number one for Argentina spoke at length about the admiration he has for Lionel Messi and the support which Messi has given the team.

During the interview, Dibu commented on the celebrations of winning the Copa America. When asked that what he lived was like celebrating a World Cup. Winning at the Maracana vs. Brazil. How he perceived it and realized what they
achieved:

“I started to realize it when the memes. People went crazy over what I said but for me it’s something very normal. The people that know me know how I am as a person, I won’t change for anyone. I’m sick and passionate about what I do and I’m a fighter without limits. And obviously without people, they hear everything you say on a pitch.

“What I said is not something out of this world, I just kept talking to the penalty kick taker. It had never been seen but it’s something that I do, not to neutralize the opponent but to get me excited, to motivate me. But I know that people were crazy about it because I stopped three out of five penalty kicks, four in six with the one vs. Chile.

“But I know that I had played six matches with the Argentina national team or seven. I had won nothing. Going to a final and for it to be a disaster, what is it worth? It’s worth nothing. People felt better because we won the final, in the semi finals I was lucky to have saved three of the five penalty kicks.

“But if I had been a disaster in the final or said “I got it, the entire world know me”, losing the final would serve for nothing. I was really excited that it was just that game. I put aside the press, the people, the memes… everything and I focused on that I had to do what I did at Arsenal, Racing or Aston Villa. And the truth is that I grew a lot mentally and physically and today I feel better and better and I will continue to improve.”

How everyone knows who Emiliano Martinez is:

“It’s normal. People remember the great Argentine goalkeepers for decisive moments. It’s like that for a goalkeeper. The start is always the number nine or number ten. The goalkeeper always goes unnoticed, it’s the truth. A goalkeeper is a goalkeeper for a reason, because he’s not good playing like a number ten.

“But that today people recognize me with a phrase or a shot, or they say my name or that Dibu made a save, it’s like when I would hear about Pato. They would throw themselves and they would say Pato or Goyco. One remember those great goalkeepers for the moments where they achieved something with the Argentina national team.

“Or Mascherano’s phrase to Chiquito (Sergio Romero) that gave him the strength to stop the penalty kicks (Argentina vs. Netherlands, 2014 World Cup semi final).

“Leo gave me a hug and told me “you’ll stop one”. You have a crack that saves you in every match, that does everything for the Argentina national team. The least I could do was to try and help him to get to the final. It’s what I set out
to do.”

If Lionel Messi told him anything else that left a mark on him:

In a match vs. Uruguay he told me “help us in the crosses because they’re brave.” In general, he says more things as a captain, he helps us all. When he scored his penalty, he could have gone straight to the center but he came and told me “You’ll save one” and I saved the next one. That’s what he generates. It’s difficult to explain but he’s a captain and the entire world wants to have him.”

“I was speechless when I saw it. They are sentences or pictures that you keep for the rest of your life. Or to have frame that I’m hugging him. Same thing in the semi’s, when he came to hug me, same as the interview or what he put on Instagram, it gave me strength to stop in the final and be even better. It gives me strength.”

On if he got emotional about it:

“That he puts a photo with the caption “he’s a phenomenon”, how can I not perform in a final? I want to give him life, I want to die for him. I said it four or five months ago, I said I prefer that he wins the Copa America before I do. And it’s true. Just like every Argentine. The Brazilians, for me, wanted Argentina to win the Copa just because of Messi.

“And an Argentine isn’t going to want Messi to win it? It (winning Copa America) happened and hopefully we can give him the World Cup.”

“We would play truco (card game), Marchesin, Musso and I against Messi, Paredes and De Paul. Practically 20 or 30 nights, we would play truco. He’s a normal guy, a great guy and someone who really wanted to win something with the Argentina national team, more than anyone in the national team.

About Lionel Messi and playing alongside him:

“You guys said it: I’m an Argentine fan that achieved my dream. I didn’t stop fighting until I reached my goal. I don’t know how many Copa America’s or World Cup’s Leo will play. Having played one with him already for me… When I made my debut at the Copa America, I said “I reached my dream.”

“And after that we won it, that I could not have thought or imagined. You want to play with the best player in the world and watching him play made me secure and made me better.

“You say “he made the players excited”, me too and I’m a goalkeeper. I wish I had played every match in a league with him. I would be a much better goalkeeper. I was with the national team for 45 days having come off a great season with Aston Villa where I got much better but with the national team, I got better by 10% or 15%. You know when you watch Dragon Ball Z as a kid? I’m Vegeta and when I played with Messi, I turned into Super Say Saiyan.”

“There’s not a specific play. In the free kicks, it’s halfway being a goal. A dead ball, if he crosses it well, it’s a goal. He grabs it (the ball) and you’re calm, he won’t lose it. We would be winning 1-0, Messi would take it and go to the corner and say alright, the match is done, there’s five minutes left.

“All of these things make you more secure. At Villa, we would lose a lot of matches in the 91st or 92nd minute. We would have the ball in the corner at the 89th minute against Uruguay or Paraguay and that’s it, we would win 1-0. These are things that make you very secure. It’s small things that I’m telling you that made us all better.”

The second part of the translated interview will be up shortly.