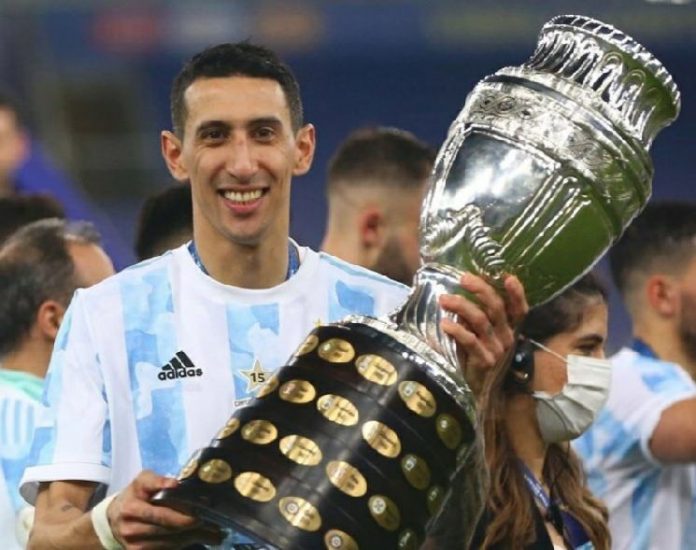 Angel Di Maria spoke to ESPN where he commented on winning the Copa America with Argentina, playing alongside Lionel Messi at PSG and Diego Maradona.

Di Maria made history last month. Scoring the winner vs. Brazil as Argentina lifted the Copa America. A long time servant of the Argentina national team, Di Maria was written off at one point. But he proved the doubters wrong.

Now back with PSG and with Lionel Messi as a team mate, Di Maria was seen smiling during training on Thursday. Speaking with ESPN, here’s what he had to say:

“I’m more than happy. Everything I dreamed about happened in one month: Winning the Copa and being able to play with Leo (Messi) in the same team. It’s what I’ve always wanted. Today was the first day of training, for me, it’s something unique.”

He was also asked about the now famous picture of himself along with Lionel Messi, Leandro Paredes, Neymar and Marco Verratti in Ibiza:

“I had explained to Leo. We’re there, it was normal. We went to meet up with him, with Paredes but Ney invited us to his place and after that Verratti joined us. We joked with him (Messi), telling him to come but he had already agreed everything with Barcelona and he told us that he had already told the kids they were staying. And after that…”

In regards to his goal in the Copa America final:

“It’s something unique, up until today, I keep watching a video of the goal and everything that happened. We had taken a lot of hits, finals losts, I had a lot of injuries… These are things that damaged us.

“But then at this Copa America I knew I was going to be a substitute, that I had to fight. I knew that. And that’s how it was. When I went to train, I felt important and that gave me strength to get better. Then I got the chance to be a starter in the final and I told Scaloni the same thing I had told Sabella prior to the World Cup final in 2014, that I was ready. Thank God everything came out as we wanted.

“The most important thing is that we took the knife out, not just for the veterans but also for the kids that are starting off with the Argentina national team. It’s a big peace of mind, beyond just putting on the shirt of the national team and knowing you have to try your best to win everything you play for.

“The sky blue and white is the max, it’s not something that can be negotiated.

“It’s what my parents taught me. My dad went from one job to another until he was doing well at the factory. It’s what happened to me. I started off at Central, then made the jump to Benfica, after that went to Real Madrid, Manchester… But the national team, always, I’ll be there until they stop calling me.”

And finally, Di Maria was asked about Diego Maradona:

“For me, he’s God, he is everything. He backed me when everyone was killing me. At the World Cup, he saw me sitting in bed and started talking to me. He transmitted everything, he was unique, he gave me everything. I only remember nice things.”