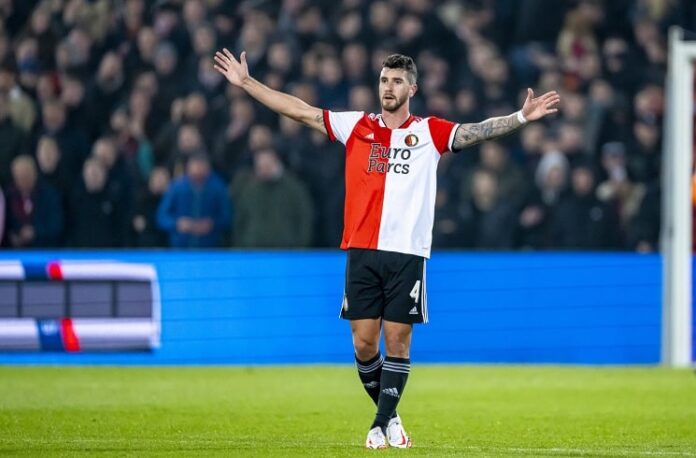 Marcos Senesi spoke about being called up to the Argentina national team, Italy, the World Cup and Feyenoord.

Argentina national team coach Lionel Scaloni included Senesi while reports also stated that Italy coach Roberto Mancini had called him up. This made him the first player ever to be called up to two national teams for the same match.

Now 25 years of age, Senesi is with Feyenoord and in the Conference League final. Speaking in an interview with Ole, here is what Senesi had to say in regards to being called up for Italy:

“With Italy (the call up) was real. There was contact with (Roberto) Mancini, who told me about his project and also with the Argentina national team coaching staff. It was in that chat I told them I was anxious to represent my country. The decision is more than clear.”

In 2017, he played the U20 World Cup and after that he was not called up for the Olympics. If there is an aspect of revenge to his recent call up:

“Revenge, no. Every time someone asks me about that U20 World Cup, I always say that it was bad for everyone, the coaching staff and the players that we had. And in terms of the U23, as much for the pre-Olympics and the Olympics, I always tried to be there but for different reasons, my club didn’t let me go.

“In the pre-Olympics, we were risking important things and at the Olympics, I was the only center back in the team… That was my bit of annoyance because I wanted to be there, to play for my country. And mainly because these are moments and competitions that you don’t have another chance to play.”

On how Mancini tried to convince him when he called him:

If there was ever a moment of doubt?

“For me, it’s a privilege that two national teams that have been doing things well wanted me. Italy not going to the World Cup is a pain for football because they are the most recent Euro champions and Argentina are doing things well and are the recent Copa America champions.

“When I got the calls, I sat down with my family and I listened to them. But the reality is that, always, ever since I was a kid, I dreamed of playing with the Argentina national team. So I didn’t have many doubts. It was more of a feeling of wanting to play for my country.”

How he sees this Argentina team from the outside:

“After the 2018 World Cup, Argentina started a reconstruction, to have a mixture of players from a new generation that are doing well and the fruits are there to see.

“The coach made the right changes or convenient changes that he was feeling and there are the results: The pieces of the puzzle came together, he found the team and the way of playing and he is doing well.”

Di María mentioned once how he spoke to Scaloni to see if he was taking him into consideration. If Senesi ever thought of doing the same thing:

“Noooo. Di María is Di María, I don’t think you can make that comparison because we are talking about a player of very high quality and who has done a lot of things with the national team. Maybe he has the benefit of being able to call and ask.

“For me, it never occured to me to do that. I thought that for some reason it was not happening and that I had to continue working to have the opportunity. And when I had it, to take advantage of it. That’s what I want to do most now…”

On if he thinks he can make the World Cup:

“I will respond to you and tell you what I told my friends. The window is open and I’m going to climb until I try to get through that window. If I don’t make it, I don’t make it… But I’m going to give everything to have that chance to be at the World Cup.”

On what he can give La Scaloneta:

“On my end, I will always try to give the best of me. As much on the pitch as off it, try to enter as quickly as possible within the group. And after that, the one who will decide is the coach.”

On how he was able to quickly adapt to Europe:

“I think I never felt that I was less than anyone and never more than anyone. And that is in large part because I was able to very quickly adapt to the team more than the league… After that, it’s football. I like the style of the Dutch league because everyone tries to play and that is something I like. And for that reason it was not difficult for me to adapt to that style of play.

“When I got here, the club accompanied my family a lot and my friends, I also had a lot of South American team mates that helped make things more bearable. After that, when you are in competition, we have matches every three or four days and you’re not aware of it… When you’re aware of it, I’m already here to play a final, hehe. You don’t have that time to rest and to think much about what has happened…”