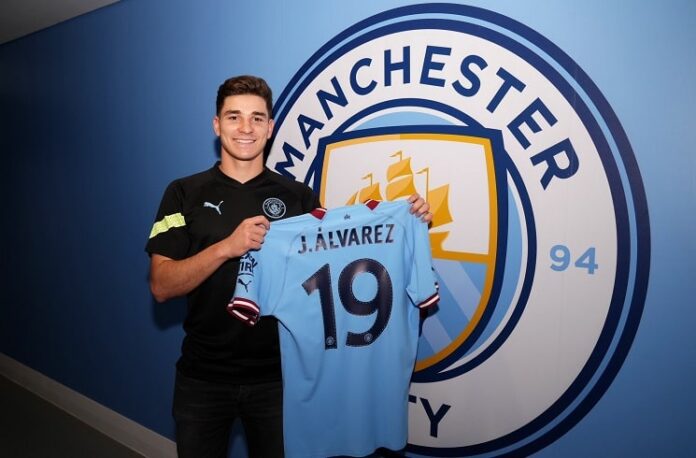 Julián Álvarez has been presented as a Manchester City player as he spoke about joining the club.

Álvarez was finally wore the blue colors of Manchester on Sunday as he spoke in front of a crowd. The 22 year old Argentine has made the transfer over from River Plate to Manchester City after signing his five and a half year contract earlier this year.

The forward is the latest Argentine to join the club, after legends like Sergio Agüero and Pablo Zabaleta wore the shirt. Speaking in front of the crowd where it was also announced that he will be wearing the number 19 shirt. Here is what he had to say:

“Manchester City has a lot of history with Argentinians before but I came here to create my own history, my own path.

“In Argentina we are used to interest from Europe. It’s our dream to play there because they are the best leagues and clubs.

“City is one of the best clubs. so I was very excited (when I learned of the move). I worked very hard and I am very excited to be here now.

“I can play in different positions. In the centre or in wings. I feel comfortable playing close to the box because it helps me score goals, but I like to assist my teammates.

In regards to not wearing the number 9 shirt for City:

“To me the number doesn’t matter. I just want to play my game and I’m not worried which number I’m wearing.

“Number 19 is the number that I like, it was the birthday of my grandmother.

“Erling is a great player, scores a lot of goals and has been an important player at his other clubs.

“I can play in the middle and on the wings, I think I can be a good player here.”