The Champions League draw for the Round of 16 took place on Monday and there are nine Argentine players remaining.

Lionel Messi and PSG will play Bayern Munich in the Champions League. For Lionel Messi, he has scored some memorable goals against the German side as PSG will try to get the one trophy that is missing from their cabinet.

Julián Álvarez will also be playing a German team as Manchester City have been drawn against Leipzig. In his first season in Europe, it’s the first time Álvarez would play in a knockout stage game in the Champions League.

Nicolás Otamendi and Enzo Fernández play against one of the teams that several clubs may have wanted to play and that is Club Brugge. Benfica were first in their group with PSG in second place.

Liverpool play Real Madrid in a repeat of last season’s final while Dortmund play against Chelsea. There are no Argentine players in those fixtures.

Cristian Romero and Tottenham Hotspur play AC Milan. Tottenham left qualifying for the Round of 16 to the last group stage match.

The only game that has two Argentine players in each side, Frankfurt are up against Napoli. Gio Simeone scored four goals for Napoli while Lucas Alario did not score any goals vs. Frankfurt in the group stages.

Lautaro Martínez and Joaquín Correa play FC Porto. Martínez and Correa qualified ahead of FC Barcelona in their group. Here are the Champions League Round of 16 games involving Argentine players: 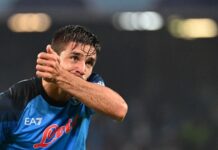