The team is still in Texas and has not yet left for New Jersey for the Copa America final. The flight was apparently delayed and MESSI posted the following on Instagram: 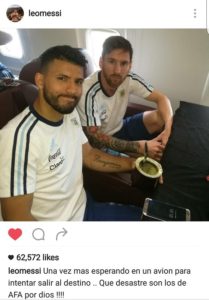 The message at the bottom reads:
“Once again waiting on the plane to get to our destination. My God, what a mess the AFA is.”

The AFA sent out a statement indirectly responding to MESSI, pointing the blame to bad weather and to the organizers of the Copa.

The larger picture of MESSI’s comments are more than just about the flight but about the AFA. Anyone who knows anything about the Argentinian FA know that they are absolutely corrupt.

Ever BANEGA ends training in discomfort