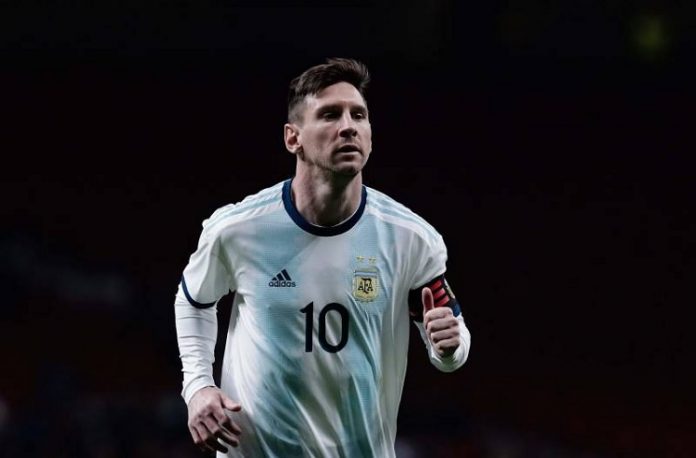 Argentina captain Lionel MESSI gave an interview with Fox Sports in Argentina where he spoke about the coaches he had with the Argentina national team, World Cups, Barcelona’s loss to Liverpool, his personal life and more.

Lionel MESSI has played under several coaches during his career with the Argentina national team. He was managed by Jose PEKERMAN, Alfio BASILE, Diego MARADONA, Sergio BATISTA, Alejandro SABELLA, Gerardo MARTINO, Edgardo BAUZA, Jorge SAMPAOLI and now Lionel SCALONI. But MESSI has selected Alejandro SABELLA as the coach he most enjoyed playing with.

Speaking in the interview, here’s what he had to say:

“The time which I enjoyed the most was with Alejandro (SABELLA) during the World Cup qualifiers. It’s true, we started bad but once we started winning, it was spectacular. When you win everything, it’s easier. We didn’t lose and we got to the final of the World Cup. Alejandro was a phenomenal coach and person, the entire coaching staff.”

In regards to the 2010 FIFA Club World Cup final where Lionel MESSI scored the match winner for Barcelona against Alejandro SABELLA’s Estudiantes:

“He played a very impressive match.”

MESSI also gave his thoughts on Diego MARADONA when he was coach of the Argentina national team:

“With Diego, we went through brave matches, we started to get hit. I didn’t enjoy that time like I did with Alejandro. To be with Diego, the desire, the enthusiasm, how he prepared was nice in that sense but difficult for the way the games were played.”

“We were missing luck. The final against Germany would have changed the entire dynamic.”

“Everything we lived through that month for the World Cup was complicated. Everything, a little. For the way the preparations were and the matches. Had we won the first match, it would have been different. It’s my fault for not having scored the penalty (against Iceland).

“Winning the first match, we would have went in different into the second. Against Croatia, nothing happened until the first goal, the unfortunate play (CABALLERO’s mistake for the goal). If not, we were even.

“We got there in a complicated matter due to the way the World Cup qualifiers went and everything we lived. The truth is we were not candidates. Today, we are in a completely different situation, it’s a bunch of new guys. Practically everyone is new, they’re young with very little matches with the team.

“In regards to the penalty at the World Cup, I was shooting them all the team and they all went in. They were shot against Paton (GUZMAN). And in the game, it was different. The result was key, scoring that goal would have changed everything, it doesn’t stop being a responsibility. I assume it and I’d do it again. I would miss penalties and score.

“I don’t like to talk about what happens within the dressing room. I was taught that the things regarding the group stay there but yes, it was an atypical World Cup in a lot of situations and I prefer to leave it at that.

“When we were tied against Nigeria in Russia, we said it was what was missing. We’d go back to Argentina and they would kill us all.”

“There’s a change which is logical and normal after an impressive run, despite the fact that we were never crowned champions but we had impressive tournaments with a final of a World Cup and Copa America. It’s something extraordinary which, for a lot of people, was not recognized. Today, we are changing, guys with little matches with the Argentina national team, very little matches to prepare and I see a good group, with guys very anxious to play the Copa America.”

“I would like to finish my career having won something with the Argentina national team or to try as many times as possible. For the people that don’t want that or comment badly about me. I want to get up and try another time, it’s the message to the things that like to see me. That’s life. You stumble and you get back up and fight for your dreams. One does everything possible but it’s God who decides if it will happen or not. He will decide what is best for me, for us. God has the final word.”

How he deals with defeats:

“The defeats hurt but I handle them differently. When Thiago (his son) was born, I understood that the priorities were now didferent and it wasn’t the result of a match. It hurts a lot to lose but when I get home and I see my sons and my wife, it passes. Before, I would get there and I’d lock myself up and I wouldn’t want to watch television and I didn’t eat. Now, I have an obligation to be at the table with my kids. I still suffer but I handle it in a different way.”

“After losing in Chile (the 2015 Copa America), they attacked us from everywhere. That we were unsuccessful, that we don’t win finals. That didn’t work. It was a bit unbearable. When people listen to that and say a lot of things…”

If he likes to watch himself:

“I don’t like to see myself, I’m not one to look, I’m ashamed to look at myself on television. I don’t like watch matches that are repeated, I leave myself with the image I have in my head, what I live in every moment, in every play. With my son, I’m getting used to watching a lot.”

“People see that the Argentina national team continuously gets killed, with comments stating that they despise the players, they kill every player and people get involved in it too. People also asked for a change in the generation. It’s true that a change should have been made. People got angry in Cordoba because we didn’t say hello but the conditions weren’t there for us, the security wasn’t enough for all the fans that were there. But at times, they say things which can’t be done. We would like to take care of everyone for their support, we’d look for anything to give.”

His personal life and his sons:

“Thiago is into all of that, he lives everything that is football, what it gives, he goes to the pitch, he lives the matches, he suffers a lot when we lost, against Liverpool or the Copa del Rey. Mateo is young. He doesn’t realize that we lose or we win, he doesn’t care.

“I could live a normal life. I take my kids to school with my wife. They have a lot of friends, they always do something, I have a nice group from school with the parents. My wife is in the Whatsapp group. I have a relationship with a lot of the parents of my kids’ friends.

“My kids are at the club’s school. They created a category for the kids of the employees. It’s been two years that Thiago has been going, first year for Mateo. We also always go, training is Monday and Thursday. Luis (SUAREZ) has a boy who’s the same age as Thiago, we stay on Tuesday’s drinking mate.”

When he was younger:

“I left when I was 13 years old, I never missed anything because Barcelona conducted themselves spectacularly with me and my family but it wasn’t easy to leave it all behind and to go there. Including my brothers, it cost them more than me, we left a lot of things behind. I wanted to say, everything went by really quickly. At 15, I was at Barcelona B and once there, it was a step. It was my dad, my mom and I and they told me “what do we do, we leave?”

“My brothers were in Argentina, it wasn’t easy to separate the family. I said I wanted to say, my dream was to be a player and we were close. After everything we did, we couldn’t just leave.”

How long he can keep playing for and the 2022 FIFA World Cup:

“Hopefully I have no serious injuries and I can continue. There’s a lot until the World Cup, I don’t know if I’ll make it. I hope to stretch it out as much as possible. I’m a little scare of what will happen after football. I have nothing in mind. I love this, as a kid, I loved it. I always played football. I always had a life related to football. A training routine, rest. Being home and not knowing what to do is difficult.”

If he sees himself as a coach in the future:

If he were to move back to Argentina:

“My dream as a kid was to play with Newell’s, I’m a fan. Something I still have inside of me but I don’t know if it will happen. There are a lot of factors. I have a family, it depends on my kids. Thiago has a spectacular group of friends and I don’t want to break that.

“Something we throw it out there, jokingly, that we are going to Argentina or to the United States and he tells me that he doesn’t want to leave. And I like that, he’s had his group of friends since he was three. They’re eight or nine, it’s a nice group. They’ve known each other since they were young.”

His friendship with Luis SUAREZ and Neymar:

“He’s (Neymar) phenomenal, we still talk and we have a group of us three. Luis (SUAREZ), him and I. It’s called something of the South Americans… The three sudacas or something like that.”

“Of course RONALDO is missed, he made Madrid stronger. I said they would feel Cristiano’s exit, which would be the case for any team. Some people got angry but it’s true. He gets you 50 goals a season, for them it was key. The entire Liga misses him, that all the good (players) are there make for better competition.”

“I never imagined what would happen at Liverpool. We came from what happened to us in Rome. We couldn’t let it happen but we knew it would be difficult. The first match was deceptive, it was an even match. Physically, they are very strong. We felt it in the second leg. Physically, they were superior.

“We went with that first, that we wouldn’t score early and it happened. They score and what happened in Roma gets in your head, the same thing can’t happen. We left the match. We didn’t compete, they were ahead of us in desire and attitude. We made dumb mistakes.”