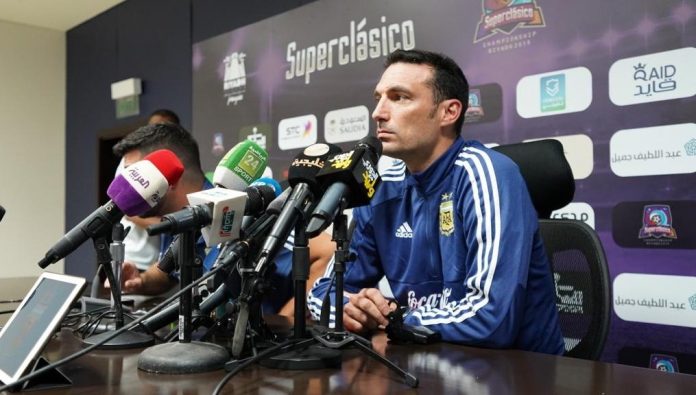 Now in Saudi Arabia for the game vs. Brazil on Friday, Scaloni gave a press conference where he spoke about his team and players. Here is what he had to say:

“The team is almost decided but there are players which are not fully fit and that is why I will wait to confirm the team.

“The last two games against Germany and Ecuador, we didn’t play the same as we did against Brazil at the Copa America. Surely we will copy a few things in terms of the last game against Brazil but the games are different.

“Our style of play will be very similar to that of the Copa America. with offensive players but also being cautious with the opponent. We hope to be able to have the match we want to keep growing.”

“Messi is a player which the opposition has to take into account and for us, he’s a plus. For us, it’s a great joy to have Leo. He’s one more in the team, he’s great with his team mates. Messi has marked an entire era in football.”

“Lautaro is well. He didn’t train the first few days, we will wait for him until the last second to see how he responds.”

On playing against Brazil on Friday:

“Brazil is always strong. We are more unified as a team, there is no doubt. We know what we have to do.”

“He’s a player that we are taking into consideration. He’s back to playing and back at a rhythm after having not played at the end of last season and it’s important that he’s back to scoring goals. He’s always been in consideration but he’s not here now because there are other players which are doing well. He could be back at any time. The door is always open for the best players.”