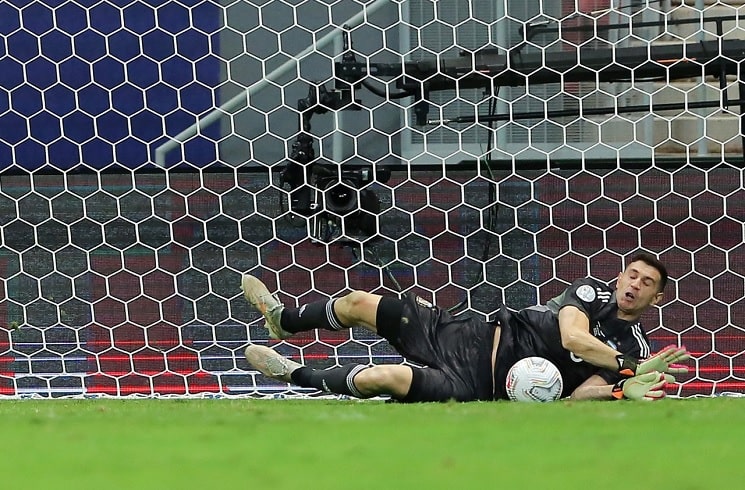 Emiliano Martinez saved three penalty kicks as Argentina got the 2-1 win in a penalty shootout to reach the final of the Copa America.

Argentina took the early lead as Gio Lo Celso played a ball in to Lionel Messi and he would pass it to Lautaro Martinez as Lautaro would score to give Argentina the 1-0 lead. Nicolas Gonzalez came close to scoring the second as Messi crossed the ball into the penalty area but his header was saved by Ospina.

The second half saw Colombia grow into the match and would make it count. A quick free kick taken by Colombia as Luis Diaz would beat Pezzella for pace and score to draw Colombia level.

Angel Di Maria was brought in for Argentina and nearly had an assist. Di Maria dribble around Ospina who came out of his penalty area as he passed it to Lautaro but Lautaro’s open goal effort was blocked on the line.

It would go to penalty kicks and Emiliano Martinez would turn into the hero. Juan Cuadrado would go first for Colombia as Martinez would guess the right way but was unable to save it.

Lionel Messi was the first one up for Argentina and he would convert his into the top corner of the net.

It was now time for the Emiliano Martinez show. Davinson Sanchez would take the second kick for Colombia but Martinez with a save. Up stepped Rodrigo De Paul but his penalty went over the bar.

Up next for Colombia was Yerry Mina and Martinez would save his. Leandro Paredes with a well taken penalty and he would score for Argentina. Miguel Borja and Lautaro Martinez woulds core theirs which left Edwin Cardona.

Last kick and a third save for Emiliano Martinez as Argentina win and are in the final!