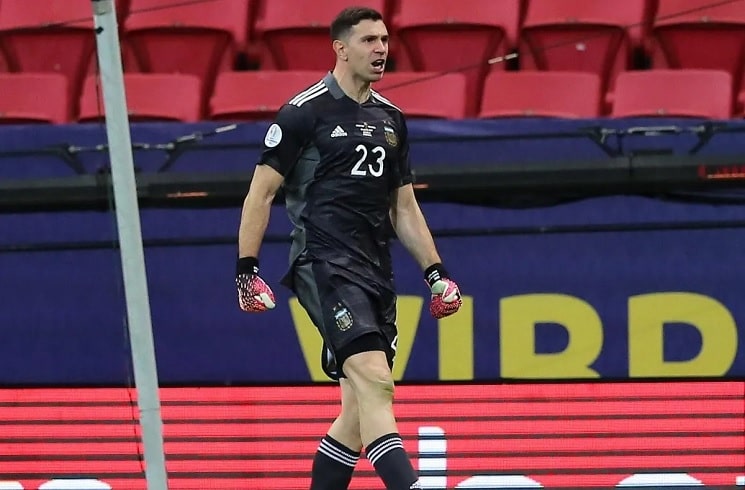 Emiliano Martínez spoke at a press conference on Friday where he commented on the Copa America final.

Martínez was the player selected to speak at the press conference on Friday as all of South America prepares for the final on Saturday. Dibu was the hero for Argentina vs. Colombia in the semi finals and he will want the same outcome in the final. Speaking at a press conference, here’s what he had to say:

“I knew I wasn’t going to be present for the birth of my daughter and that made me stronger. I worked with my psychologist to dedicate myself 100% to the Argentina national team. The captain helped me a lot and I am enjoying it.”

He also commented on the penalty shootout in the semi finals:

“I decided to study the rival. I knew they liked to look, I had to wait until the end. It was my night.

On what he said during the penalty shootouts:

“The truth is, I don’t care. In football, a lot of things are said, on and off the pitch. It’s a football match, these things stay on the pitch. I am concentrated on helping the defenders.

“I’m not going to think about if they can hear me or not. Everything is heard these days. I have always played the same way, now you hear things that you didn’t hear before. It’s normal in football.”

Dibu and Colombian goalkeeper Ospina both played together at Arsenal and Dibu had this to say about it:

“I have a good relationship with Ospina and I congratulated him on his penalties in the quarter finals. It was something I wanted to do, we shared three years at Arsenal, we would be together in the training’s. I am proud to have reached a final with my country and to give them some joy during a very difficult time.”

In regards to the final itself:

“It has been several years that we have been waiting for a final here, at the Maracaná and we are going to give it our all.

“The tears were those of pride. It’s a dream of mine to play in a final and to lift a trophy with the Argentina national team. There’s no better scenario than to play against Brazil at the Maracaná.

“We have made a lot of trips going from Brazil to Argentina, it was very tiring but we worked together and that will have us strength for tomorrow.

“Ever since I was a kid, it has been a dream of mine to play a final with the Argentina national team at the Maracaná. The entire Argentine public wants to see us win in Brazil.”