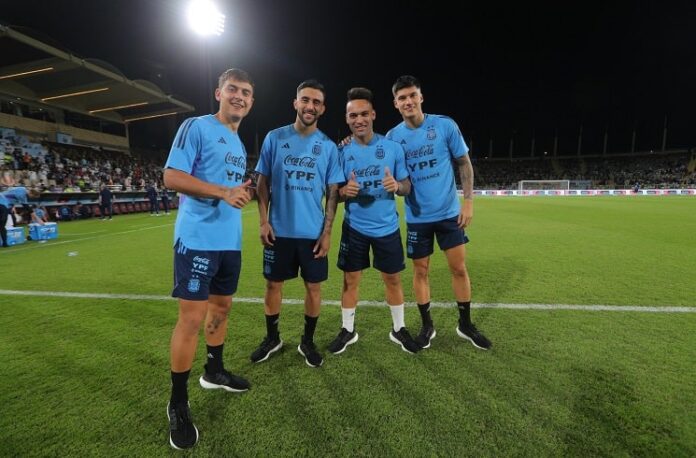 Every Argentina national team player has arrived for the 2022 World Cup.

Argentina national team coach Lionel Scaloni has all of his players with him for the 2022 World Cup in Abu Dhabi. Emiliano Dibu Martínez, Alexis Mac Allister and Lisandro Martínez arrived an hour ago, early Tuesday morning in the United Arab Emirates.

The team held a training session at Al Nahyan stadium with fans in attendance on Monday. Scaloni had 14 players available for the training as Nicolás Otamendi, Enzo Fernández, Papu Gómez, Gonzalo Montiel and Marcos Acuña arrived shortly after the training had ended.

Here were the players which trained:

Nicolás Tagliafico trained separately from the team but is not injured. He trained alone since he had played the full game for Lyon on Saturday.

They will also play against the United Arab Emirates on Wednesday. It will be the first time that all 26 players for the 2022 World Cup will be able to train and play together.

The team trained with Franco Armani and Gerónimo Rulli as the goalkeepers. Lautaro Martínez, Paulo Dybala, Nicolás González and Joaquín Correa arrived to Abu Dhabi as the team trained.