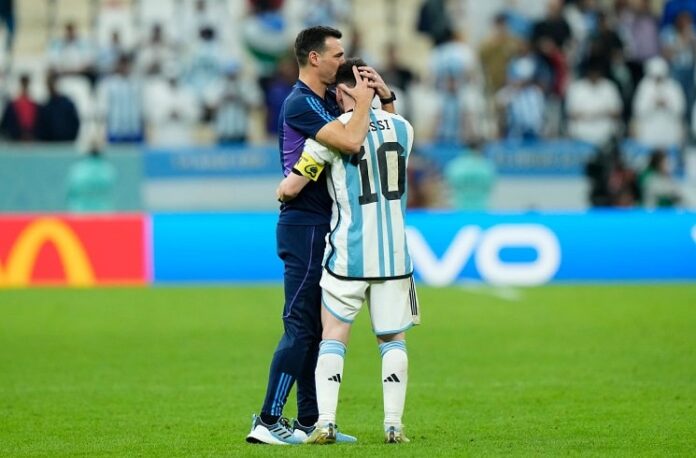 Argentina national team coach Lionel Scaloni spoke to the media after the match about the team, the World Cup, Lionel Messi, Alejandro Sabella and the penalty kicks.

Lionel Scaloni has his team in the semi finals of the World Cup after penalty shootout win vs. Netherlands in the quarter finals. Speaking to the media after the match, here is what he had to say:

“It’s an objective. Now that we are at the dance, we have to keep dancing. We would like to continue, with all the respect to Croatia. Let’s hope we live up to it.

“The first objective is to pass the group stages and after that the quarter finals and now we are in the semi finals… We are at one step. With the most respect, we are very close.

“They have the spirit of knowing how to face every moment in the situations. We didn’t deserve to go to penalty kicks. Even at that, the team continued to show its face. A difficult match, complicated. We had it under control but football has this, it’s a beautiful sport. When you think it’s all over, it’s not over.”

“The match was for that. It’s a quarter final match. They are things that happen on the pitch. We didn’t play with one less when we had the ball, with 11… Leo showed that he is the best of all time. We are happy to have him.”

In regards to the referee:

“I won’t talk about the referee. I know him, I have a good relationship. He had my shirt from when I played. I still think he is a good referee. It’s not worth it, it’s over.”

When asked about Alejandro Sabella:

“I hope he is proud of what we have done with this group. I’m sure he is.”

About the penalty kicks:

“We knew who the kickers were going to be. There were too many players. That is good, it gives you confidence. It’s still something positive for the team to see that everyone wants to kick. And we knew that Emiliano, like against Colombia, could save. A little of a repeat of that and it gives the players confidence. We only had to decide the order but there were plenty of takers.”