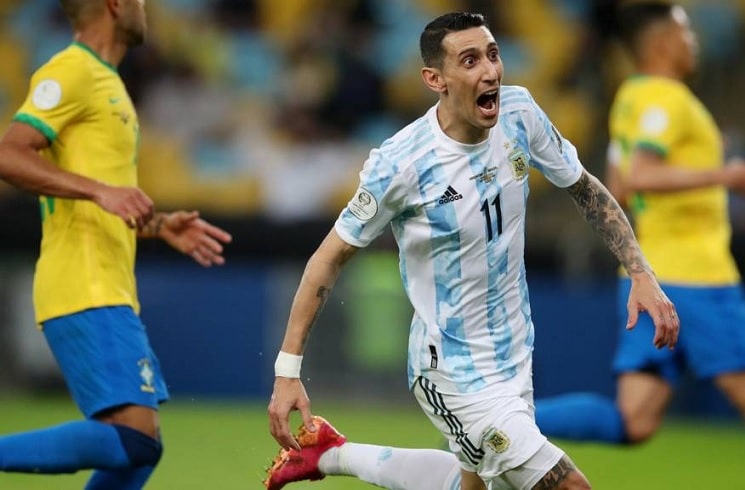 While Lionel Messi was the Copa America top scorer with five goals, there were some gems which found the back of the net for Argentina.

Messi scored his first of two free kicks at the tournament in the team’s opening match vs. Chile. Guido Rodriguez, who was in and out of the team throughout the Copa, scored a header in the 1-0 win vs. Uruguay.

Alejandro “Papu” Gomez managed his first of the tournament following a great pass by Di Maria in the win vs. Paraguay.

After that came the four goal fest vs. Bolivia. Gomez managed his second after great work by Angel Correa and the assist by Messi. Speaking of Messi, he got his second and third goals of the tournament in the win vs. Bolivia, a penalty and a chip goal with Aguero getting the assist. Lautaro Martinez broke his duck with a close range effort.

One of the players of the final Rodrigo De Paul managed his only goal of the Copa in a 3-0 win vs. Ecuador. An assist by Messi and a cool finish by De Paul gave Argentina their first goal of the match.

Lautaro Martinez added a second goal to his name at the Copa America, once more from close range as he placed the ball into the top corner of the net. Messi added the third, an incredible free kick from the edge of the penalty area.

Again it was Lautaro scoring, this time for the third straight match as Gio Lo Celso played a ball into Messi who assisted Lautaro with his first time finish.

Angel Di Maria wrote his name in the history books as he not only scored at the Maracana but scored Argentina’s winning goal vs. Brazil at the Maracana in a Copa America final, a chip one at that.

Of the 12 goals which were scored by Argentina at the tournament, which one was your favorite?